Forums
Talk Software to Me
NX CAD
The Cue Line in NX ...
Notifications
Clear all 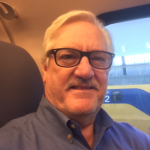 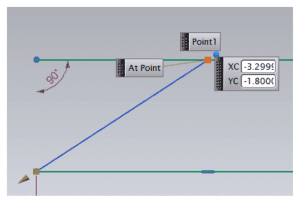 That’s often the response when an NX user gets hung up during a particular command that has multiple steps or many options. They’re missing that one little tip to help them along in the process. Like the neighbor who borrowed a chainsaw and quickly returned it, claiming it was far too slower than his axe, there was something he didn’t know… I told him, “Well, when you pull this rope it starts the motor.” (Vrooom vroom, VROOOOOOM!) “WHAT’S THAT NOISE!!!???” shouted the startled neighbor!

Sometimes it just takes a small suggestion or a little hint to get past the problem. Such is the purpose of the Cue Line on the NX window.

The Cue Line sits inobtrusively below the Menu Bar, below all those magnificent icons and toolbars, humbly offering words of advice to wayward CAD gurus and neophytes alike. For anyone with even a few hours of pioneering through an NX session, many of the prompts become mundane and easy to ignore. False confidence soon comes and eventually, the Cue Line takes a back seat to nearly everything else on the screen. Users are content to discern their next moves merely by on screen feedback and their own veteran senses. But alas, once the going gets tough, users are sometimes too quick to resolve an insufficiency in software effectiveness instead of their own ignorance.

For instance, here in the drafting function of Broken View, while we try to define the spacing between sections it might be assumed that simply selecting a section and entering a Distance value should be enough. Instead, NX prompts the user to identify from  what we want to space our section from… one of the other reference boundaries. 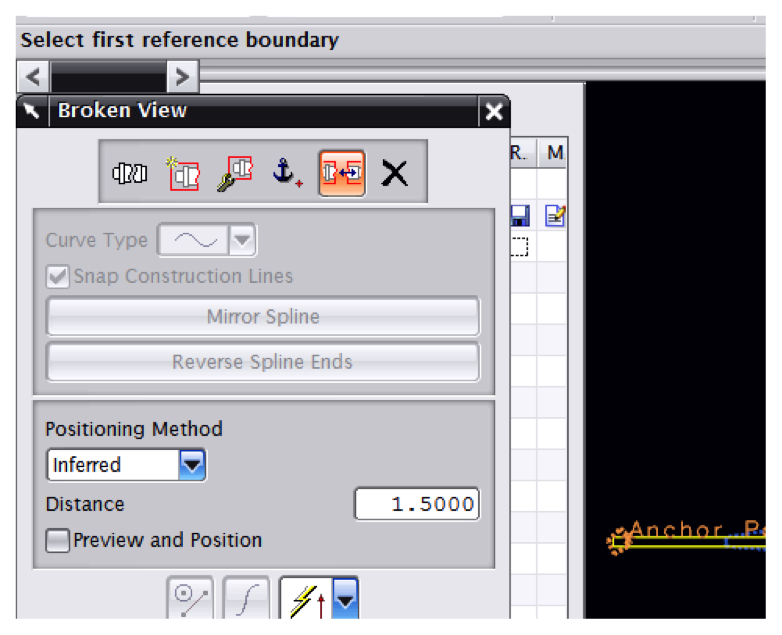 NX is actually offering a bit more of an option than might be inferred at first. What says the spacing value has to be defined from the section adjacent to it? You can enter a value that determines the section’s location relative to the section of the extreme right end if preferred.

Likewise, by merely selecting the Positioning Method of “Distance” instead of “Inferred”,  NX immediately prompts for a vector object selection. We might have assumed the only direction for a distance would be measured horizontally between the sections since it’s common in this traditional view modification practice.

Another good example is in the creation of a Studio Spline. While defining the points the Cue Line offers suggestions for much more than just “select points to define spline”.

Sometimes we miss out on some really nice options built into the creation process that are often thought of as editing commands.

Sketching also presents some nifty and often unsuspected options. In the example below, we’ve completed some sketch curves and are at rest with no active command at present.

What’s that? “…or double-click an object”? Wha? What’s that about? Double clicking the line on the left side of this rectangle yields a dialog titled “Line (Non-Associative)”. Non-associative? How could a sketch curve that’s constrained to be coincident at both its end points be non-associative? This is a temporary status while in this edit mode whereby we can redefine this line in lieu of existing constraints. Read the Cue Line. 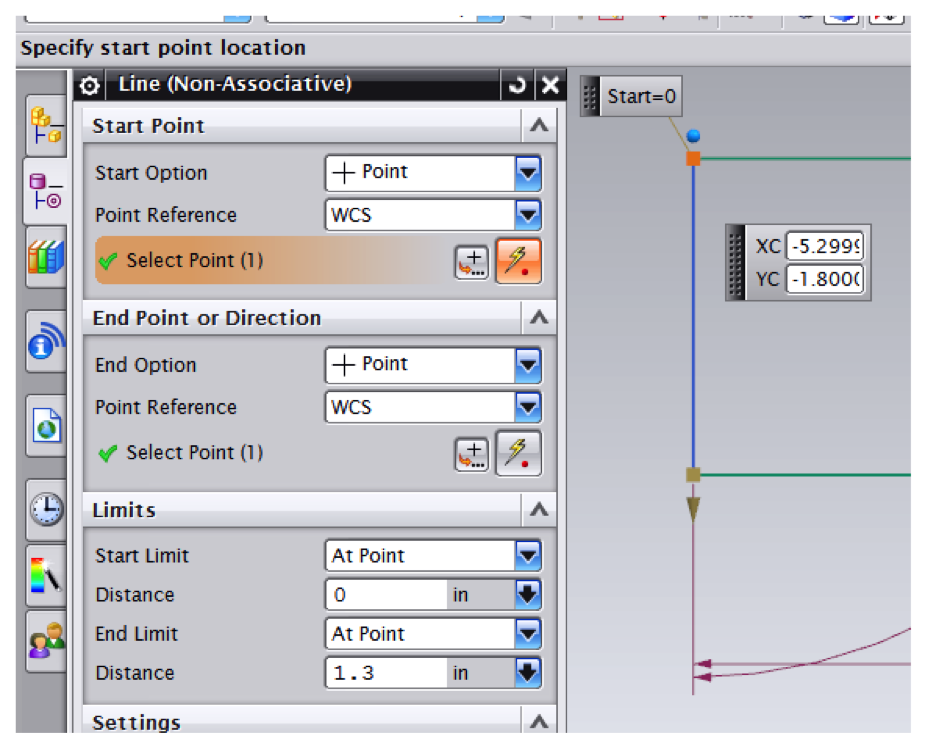 The Cue Line indicates that we can redefine this line by selecting a different end point, even though there is already a coincident constraint at its end point. Selecting on the midpoint of the upper line of the rectangle will yield an interesting result! 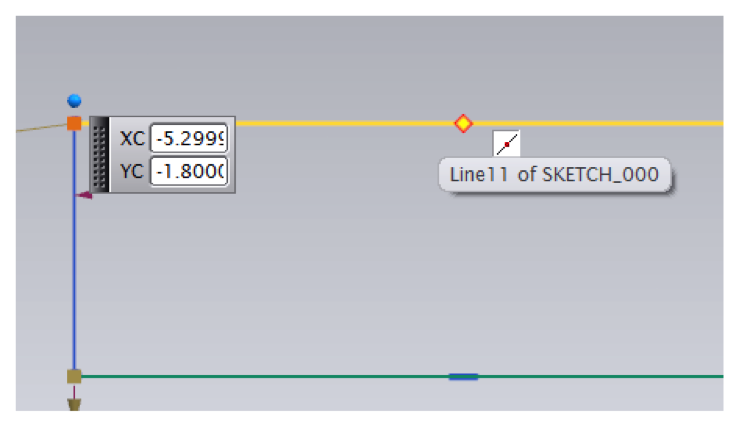 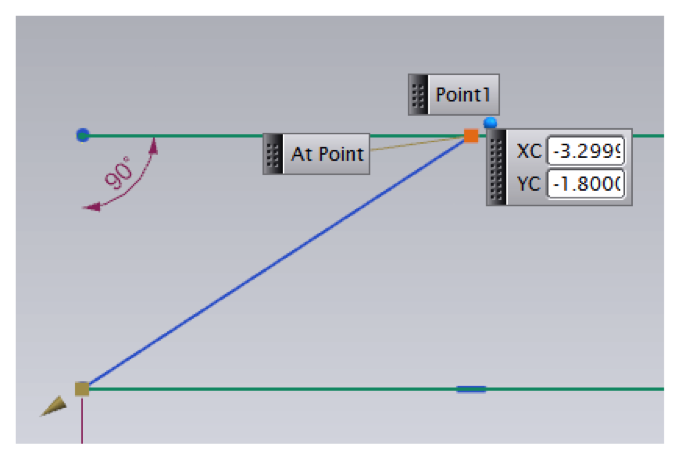 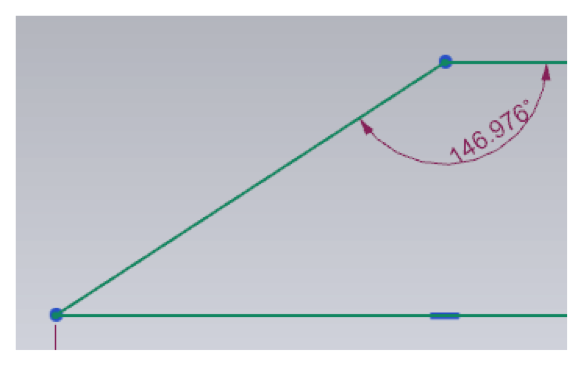 We have just moved not only the endpoint of the left line to the selected location but the coincident constraint was also reapplied from the upper line’s endpoint to… well, the upper line’s NEW endpoint – its old midpoint! The Cue Line often suggests creation and editing options we had not thought available.

One last example: When creating a Through Curves feature, the selection process of the individual section strings can be a little challenging. Firstly, in order to end the selection of the first string and begin the selection of the next one, that’s easily accommodated with the “Add New Set” icon in the dialog. NX will highlight that icon in green, mapping its selection to the middle mouse button. But the Cue Line also reminds us of that in addition to the fact that we can select a mix ‘n match of curves or edges as section objects.

If you’ve ever tried to create a Through Curves feature by selecting all of your intended curves in the first string, you’ll know it complains about curves in the string being disjoint or lacking continuity because they aren’t connected.

When working in Education Services at Siemens PLM Software for nearly 14 years, it was a common joke to state that amongst any 10 instructors, you could 11 different opinions! However, one of the things that all of us agreed on was that the Cue Line was the most important thing on the window. That question was a part of the Designer and Drafting Certification tests. It’s THAT important!

This topic is also published as an article here »
Quote

In NX 12, I WANT TO MOVE THE CUE/STATUS LINE FROM THE BOTTOM TO THE TOP - JUST BELOW THE TOP BORDER BAR. I CAN'T FIND ANYWHERE TO DO THAT IN THE CUSTOMIZE TAB. 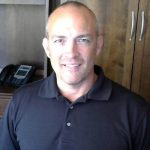 GENE, when you have NX open, go to menu –> preferences –> user interface, and in the LAYOUT group you can switch it from bottom to top.

No online members at the moment

A lot has changed in the past week. Together, we’re all taking steps to keep our families and communities safe and healthy during the current COVID-19 outbreak. Many of our customers have made us aware of their protective measures – including restricting travel and limiting face-to-face meetings. As the news is constantly changing, more offices are shutting down while having employees work from home.

In this time of uncertainty, we want to make sure your access to the software and services  you depend on is something you don’t have to worry about. That’s why we’re here to assist with emergency license matters to our NX and Solid Edge customers who are working remote.

At Swoosh, we are also restricting travel and on-site visits. This involves transitioning all scheduled classroom training courses to virtual classes through April.

Our technical support team will continue to be available to support you and promptly answer any questions. Please don’t hesitate to reach out to our team for support requests using one of the three methods below:

Stay safe, and let us know if there is anything we can do to help you conduct business as normally as possible.