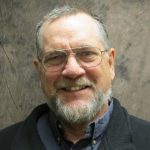 Two new options have been added when you choose a Tool Axis of Interpolate Vector → Linear.  You can now define that the tool axis will orient relative to the U or the V direction of the surface.

These options allow you to define as little as one vector for the first cut and one for the last cut.

The next illustration shows a surface cut with four interpolation vectors but due to the contour of the surface, the tool path cuts up the wall.

Using the new options, I can remove the second vector at the end of the first cut and at the one at the end of the path so that the orientation is held from the starting vector on the first and last cut.  To accomplish this select the points to be removed from the list and choose “Ignore Point”.

Generating the operation with the revised vectors now holds the tool axis for the entire length of the first and last stepovers.

Looking from the end, you can see that the tool gradually changes the tool axis as it traverses across the part.

You may want to move back to a fixed orientation once the cuts against the walls have been cleaned out.  There is no need for the machine spindle to have 5-axis orientation while it cuts the middle of the part.

You can choose to add a new tool axis location just by selecting a point on the edge of the surface and a tool axis vector at that point.

Now when the operation is generated, 5-axis tool orientation is used between the wall and the 1st added point.  Then a fixed axis is used until it reaches the 2nd point.  Then it once again becomes a 5-axis orientation.