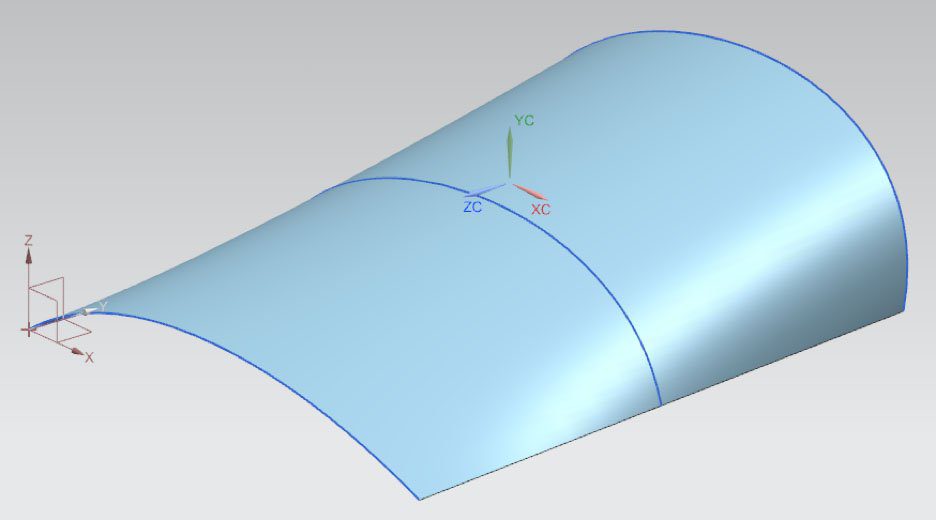 This article will provide precise steps for creating a spline with the shape and flow characteristics of and positioned halfway between 2 other non-identical splines.

The inspiration for this article was from reading the Siemens Software Field Bulletin from GTAC, March 2018 where a more elaborate (and somewhat confusing) approach was taken which used many sheet bodies, a Midsurface feature, and an intersection curve. The purpose of this exercise is to create a unique, associative spline that emulates the combined shape of two existing, unidentical splines where that unique spline shape is not merely an iterative equivalence to the master curves. In other words, the resultant spline is truly the child feature of both parent splines but does not mimic any of their distinct, exact shape.

Other approaches, such as using Scale Curve, Offset, or Combined Projection might yield results that emulate one or two splines but not a true hybrid derivation of the two input curves.

There may be multiple scenarios where this procedure provides an adequate solution:

NOTE: In most of these cases, the new curve must be created in history between the input curve(s) and swept feature time stamps.

Assume we start with a simple example of 2 splines with drastic differences in shape, one a flatter, smoother spline and the other a much “humpier”, high-profile shaped spline:

The drastic shape differentials is probably not a real world scenario – we’re exaggerating this just for the sake of dealing with potential problems.

Select the sheet body. Immediately, a preview of curves appear, indicating the current setting of the dialog.

The center curve then represents the true mid-spline that emulates the exact shape of your input splines. Change one of the input splines and this mid-spline will remain exactly in between and a true “half shape” of both input splines

NX offers many, many explicit curves commands which are either inherited commands from the earliest Unigraphics commands used in the days of wireframe models or are newly developed “smart” commands that capture design intent in ways that the mind can hardly imagine… until you need to create the one shape that has those certain, unique and critically important characteristics.