How to Change the Units of an NX Part File

How to Change the Units of an NX Part File

NX part files are defined with a basal unit of either inches or millimeters, which cannot be changed interactively within NX. This article discusses options that involve unit definitions, conversion, and how units can be managed. 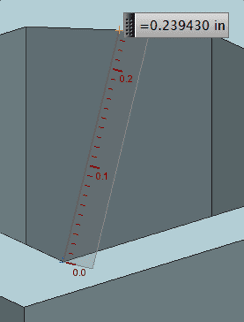 NX provides two default unit system files: one English and one metric. You can choose one of these unit systems when you create a new part file. The settings for that unit system are then applied and stored with the file. By default, all parameters, values, dimensions, expressions, etc. will be created in the same generic system of measurement.

Note: NX does not allow the changing of the unit systems interactively within NX nor does it allow importing a part file of differing unit.

The program converts all model data appropriately and applies a conversion factor to all dimensional data (i.e., lengths, coordinates, origins, etc.). Non-dimensional data, such as angles, scalars, etc., are not affected. Therefore, the model maintains the same physical size after conversion.

The program changes the internal representation of the part by:

Built-in (system) expressions are not affected such as “pi”, conversion factors, algebraic and logarithmic functions, etc.

Note that the default directory where the command line starts is in the folder of the username “garrett” on the computer. Therefore, in order for the operating system to find the actual command file, the pathname of the containing folder, C:SiemensNX8.5ugii, also needs to be entered in front of the command. This is the “root directory” of NX. There are other methods of running this executable.

The Units Manager allows you make changes to units of measure and create new unit systems. Create a custom unit when you want to use a unit other than the available five standard units. New information from each Units Manager session dynamically updates in all key dialogs. To do this navigate to Analysis > Units > Units Manager. 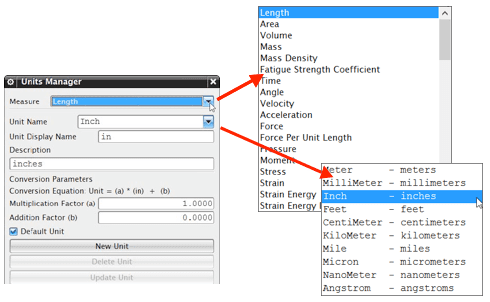 This tool should only be used in a controlled environment where all users accessing the data understand the practice and application of the managed units.

NX expressions allow you to convert values as you enter them in value fields as shown below.

It is often necessary to enter values into text entry fields that are based on another unit system than that of the Work Part such as creating a clearance hole in an inch part file to accommodate a metric fastener. The value of the hole diameter can be entered as the metric diameter converted to inches in an expression. 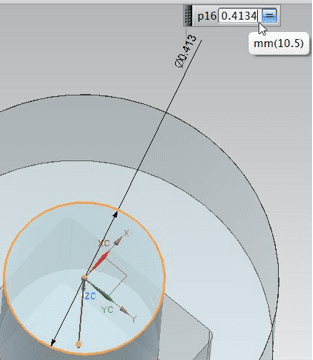 NX Help lists all of the built-in conversion functions as follows:

Instead of using a conversion function, a simple unit converter command can be executed during a command. This gives the user the value desired for the text entry field of the feature. It is a simple “constant” value for the parameter of the feature. To do this navigate to Analysis > Units > Units Converter.

Simply enter the value you have in the “From” field and select the units of the value. The “To” field immediately reports the converted value in whatever unit is selected.

Performing a distance measurement results in a linear value in the same units as the part file by default. At any time, the analysis (measurement) units can be changed to whatever unit system is desired by executing a Simple Distance Measurement command (see below).

Then select two objects in the graphics area. A ruler and a value box appear with the value in part file units. 1.    Choose Analysis->Units.
2.    Change the units from inches to millimeters. 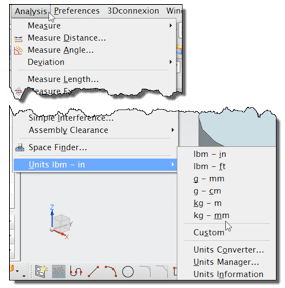 3. Measure the length again and the popup will be in millimeters.

4. Measure the diameter of a hole… also millimeters. 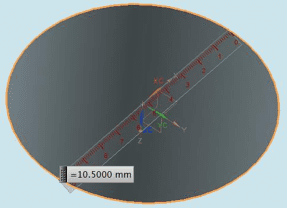 Stop now and consider the ramifications…

Changing the units in the Analysis drop down has a tremendous impact on subsequent modeling functions!

It should be understood that this modification of the analysis units is NOT changing the unit system of the part file, only the units in which all expressions are being created. And, as you can see above, none of the existing expressions are affected.

Default Behavior in Other Applications

NX Assemblies are able to contain components of mixed units without lack of functionality with the exception of Working In Context – the Work Part cannot be a Component file with different units from the Displayed Assembly.

Regardless of the units of the Master Model, the Drafting Application is able to allow either inches or millimeters for:

CAM data is not dependent on model units.

This article discussed options that involve unit definitions, conversion, and how units can be managed.

In an engineering/manufacturing environment where unit definition is mixed, robust solutions are available. With the various methods offered by NX, however, the user must be careful and think of downstream applications that may be affected. Also, corporate standards should dictate how these methods are to be implemented to avoid confusion and errors.