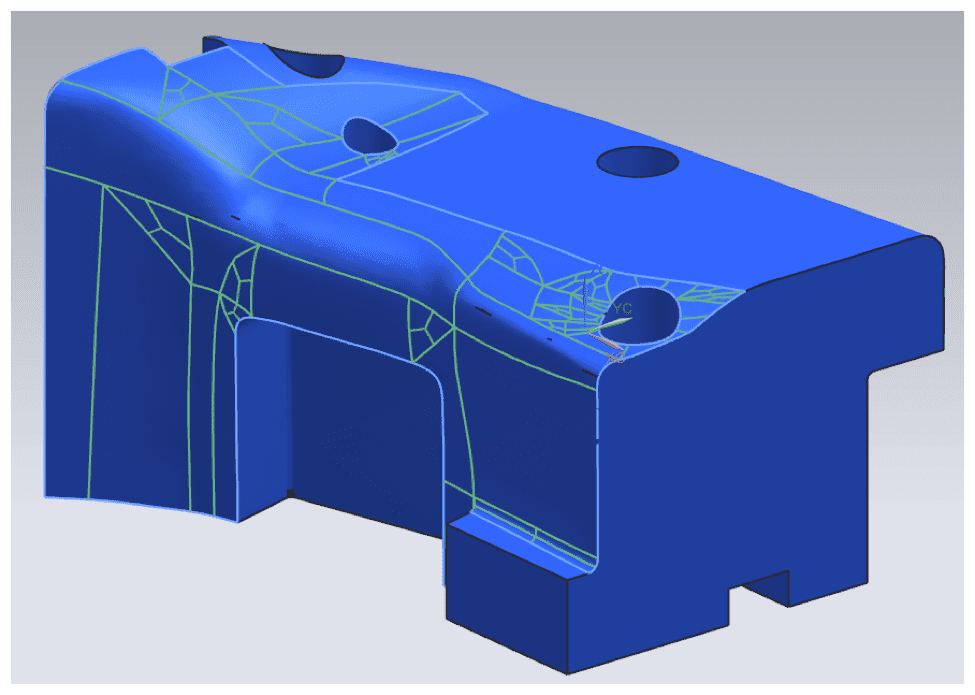 Reengineering describes the process of creating a newly engineered design from a previously complete design, or to “engineer again”, as Merriam-Webster states. However, in the CAD/CAE environment the task can be much more complex than simply developing a product design from scratch as a -1 revision. The capture of physical geometry for shape, size, and location is accomplished by many different processes, machines, and software applications.

There are three general sources from which we create model geometry in a CAD software product:

The latter method involves the practice of reengineering and is growing in business processes and expanding into a diversity of machine technology, computer software, and industry standards. Machines designed to “feel” the features and characteristics of a part have been in a process of refinement for decades. The Coordinate Measuring Machine (CMM) has been developing more accurate and robust output since its inception in the 1950’s. New file formats came into play as each manufacturer and data collection and reduction system improved the assessment and probing technology. And thus, we arrive at the focus of the reengineering effort – reusing this data.

Traditional CMM technology using touch or scanning probes is often combined with other measurement technology today. This includes laser, video, or white light sensors to provide what is known as multi-sensor measurement. Primarily, scanning output is in one of two major formats: point data and polygon data but the file format can come out as:

Siemens NX (formerly Unigraphics) software is able to utilize both point and polygon scan data types and the different file formats, bringing them directly into an NX part file. 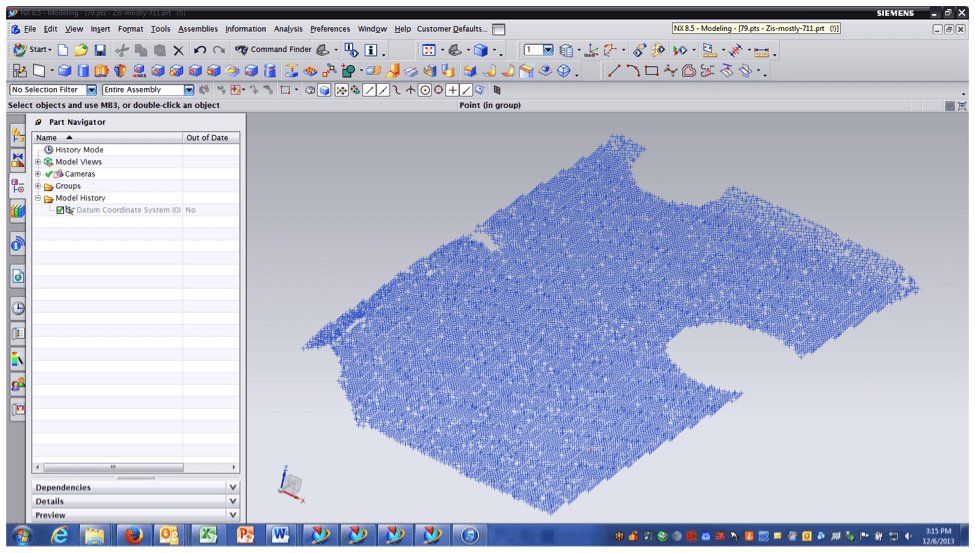 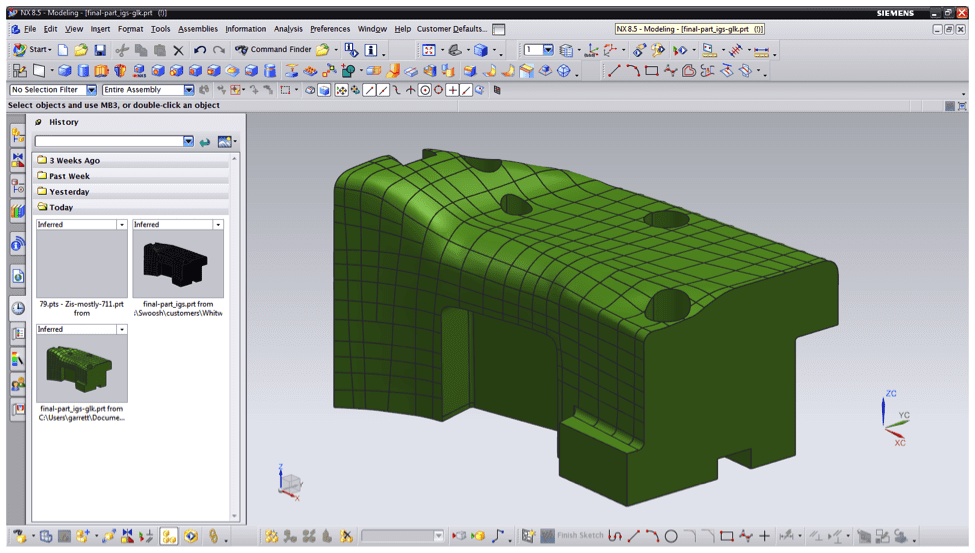 In these two approaches to reengineering the geometry, NX offers tools to accommodate ease of use and accuracy. For point data, the user can create a new part file and choose the Points From File command under the File drop down of the Menu Bar. 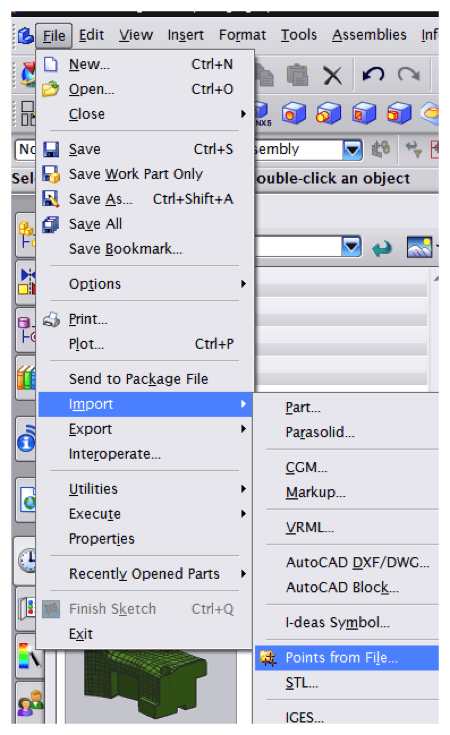 For polygon data, 3D printer format (also known as stereo lithography or “.stl”), or facet body, the user can either open the foreign file format directly with the File->Open command or they can import the data into an existing NX part file

Since the early days of Unigraphics, there have been commands to accommodate the creation of surfaces by defining either point locations or pole locations. Both commands (from the Insert->Surface Menu Bar drop down) provide a means of importing and creating in one step using a “Points from File” option. Additionally, each method also allows the individual selection of points in rows.

Once the point data resides in the NX part file, various methods are used to use this data in creating surface and solid bodies. A highly efficient command called Fit Surface (new in NX8.5) allows the user to generate a single surface from all or a portion of the points in one step. The points must first be grouped into a set using the command Format->Group->New Group.The drop down option at the top of the dialog offers analytic as well as freeform options. 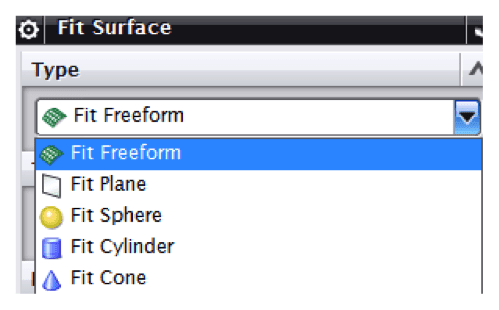 The process involves the selection of points, a Fit Direction options selection, and an optional step for defining a 4-sided boundary. The level of Parameterization is accommodated with the selection of degree and patches in both the U and V directions of the intended surface. The Smoothing Factor is an approximation control which allows greater or lesser deviation from the actual point locations with the resulting surface having less radical changes in curvature and contour. 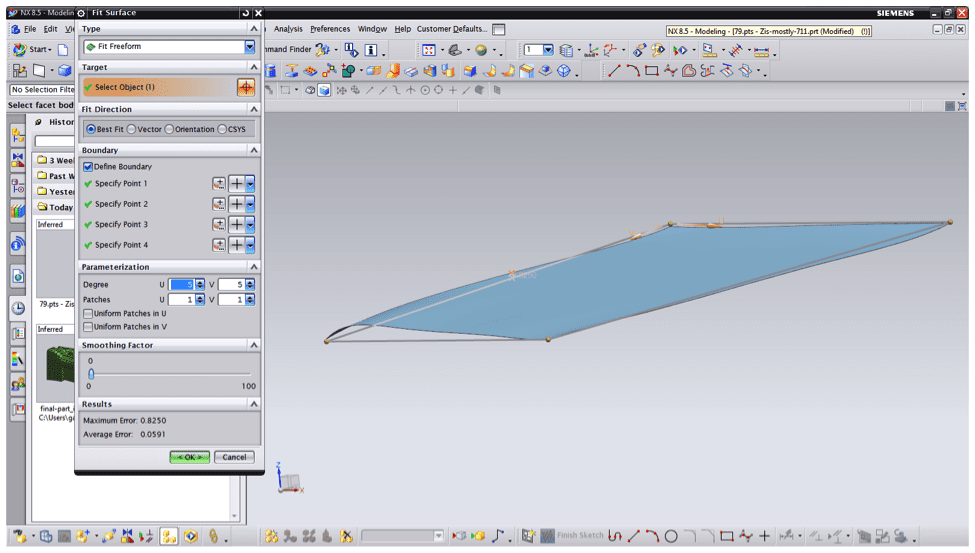 The results of these commands yield patches of the surfacing that can then be trimmed and sewn or combined with other commands like Face Blend, Bridge, Section, etc. Once adapted and manicured to completely enclose a volume, the sew operation will transform the surfaces into a single solid body.

Another approach to using the point data, again more traditional, is to create curves (lines, arcs, conics, and splines) from the points near the edges of the intended surface or solid geometry boundaries and then create the surface (sheet) or solid bodies from the curves. The full suite of Freeform tools in NX provides nearly endless solutions to accommodate this approach including:

A newer approach that utilizes the polygon (facet or .stl) types of data allows the user to break down the polygon surface areas into general shapes, ideally somewhat analytical in nature but freeform contours are completely acceptable.

This process is clearly shown, along with other forms of adapting and using facet geometry in the following video.

Reengineering can be accomplished in many ways and the results are, like many other tasks, always a result of the source data and techniques used. From the techniques shown above, users are able to generate newly engineered parts that can serve as the base model for additional parametric features or can be modified with Synchronous Technology. Hopefully this report provides insight into the many methods that NX can be applied to reengineer existing products.